Last week I came across these panels in the Mott Building lobby of the Kaiser Permanente Medical Offices in Roseville, Calif. I liked the design enough to return twice for another look . . . 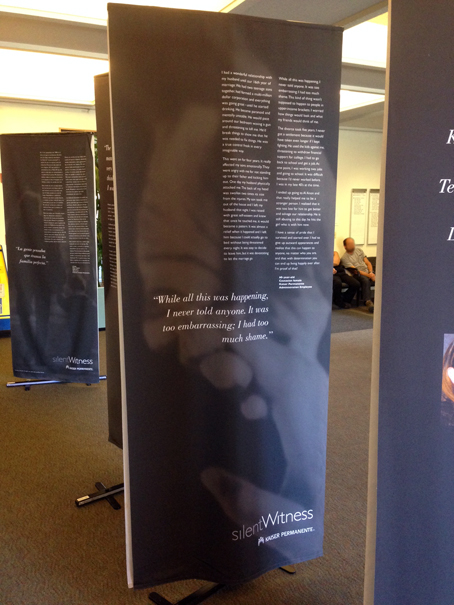 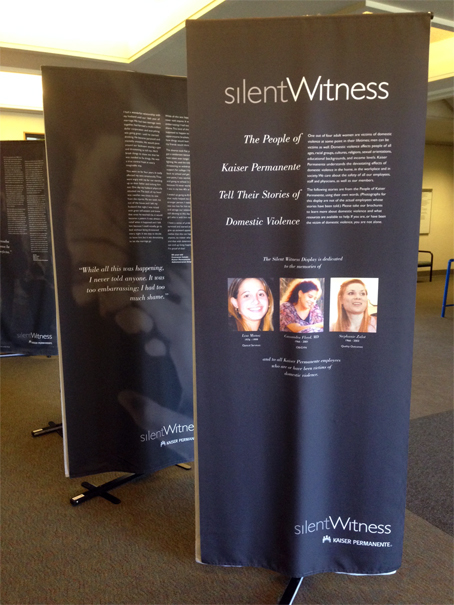 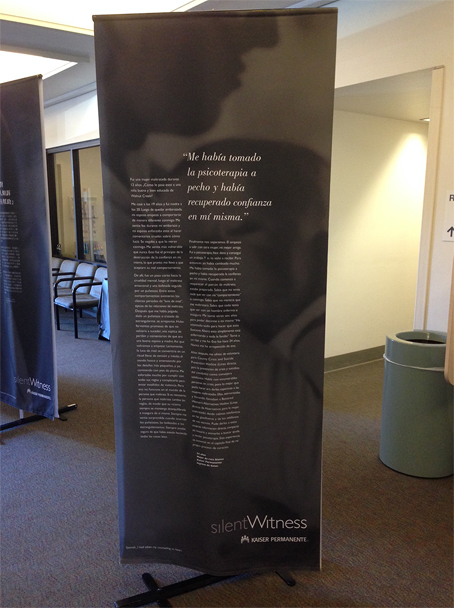 The panels are about 7′ x 3′, sparingly typeset on both sides in white atop very dark, nearly black, photos. The fabric is light and waves faintly when a door opens.

Each panel tells a Kaiser Permanente employee’s firsthand story of domestic violence. Created maybe a decade ago, the presentation is displayed throughout the Kaiser system each October, Domestic Violence Awareness Month.

I love the restraint. It’s a hot-button topic, ripe for sentiment and outrage, but note what’s not here. We see no screaming headlines, no sensational photos (battered faces, for example), or any other attempts to “grab” attention (bright colors, bold graphics, and so on).

Indeed, absent are all of the usual clichés. Instead are stately proportions, low-key typography, understated layout. “It was so serious,” said Kaiser designer Jason Pillon, who directed the work. “We were deeply affected by the candor and courage of those whose stories we were presenting, some of whom are not alive today.

“It was depressing,” he said, “but it couldn’t be bleak. We wanted to convey hope.”

To do this, the designers leaned heavily on memorial-style design, which conveys with heartbreaking dignity the strength that’s born of loss. In style and substance, the panels share elements with the Vietnam Veterans Memorial, 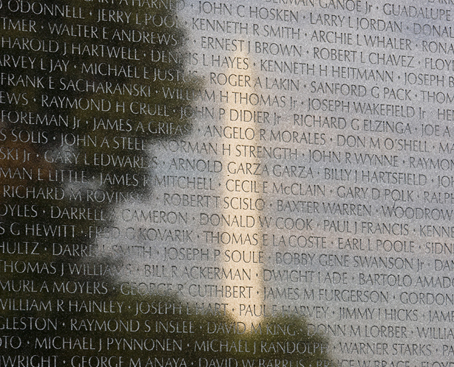 and the National September 11 Memorial, 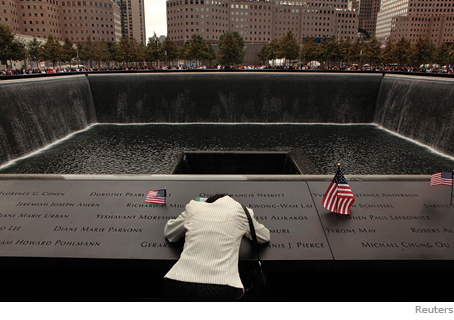 mighty touchstones that bear the weight of a nation’s collective grief.

Below are two of the visual techniques at work:

(Above) The design begins with a dark field, which by itself has weight, and most of it is left dark — there is considerably more unprinted than printed area. This “white,” or empty, space allows the eye to settle on the words without pressure or urgency. The result is the sense of certainty and calm — more impressive than shouting or thrashing for attention.

(Below) The panel is divided into three narrow columns. A clear, sans-serif typeface — in this case Gill Sans — is set on wide line spacing (about 175%) and placed into only two columns: 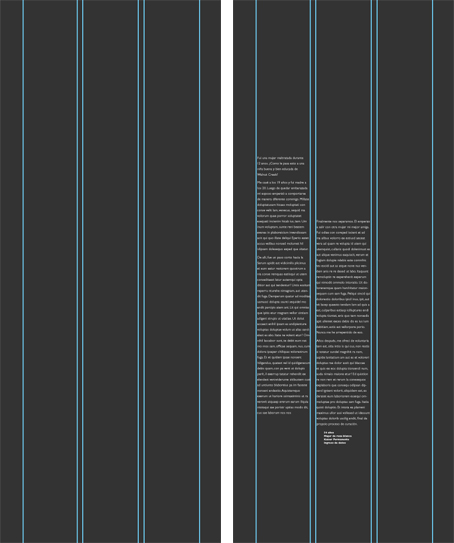 (Above) The thing to note is that the columns are not aligned in a block but staggered irregularly. Why? To create a flow that a block would not. The eye moves with the page, not against; without defined beginning or end, you flow into the story and flow out of it.

(Below) Conversely, a block stops the eye, defines a space: 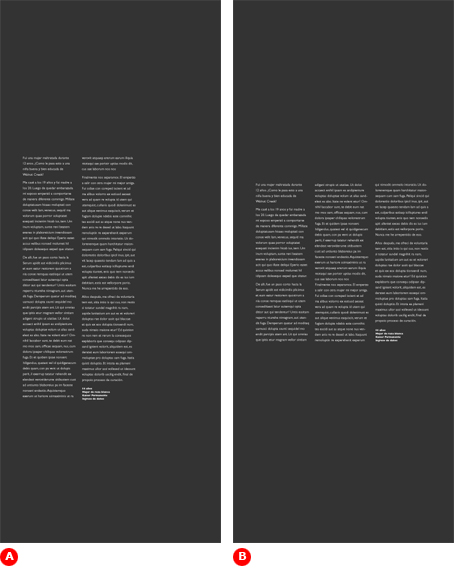 (Above) A block is a visual object. When a block forms in positive space, you get equal and opposite blocks in the negative spaces, which are easy to see above. (A) White text columns blocked to the left yield heavy (black) blocks above and below and leave the right column obviously empty. We call this inactive, or dead, space, visually unproductive. (B) The three-column block divides the page into thirds, which could have significance but is meaningless here.

In another situation these could be turned into successful layouts — a poster grouping different kinds of information, for example — but here they have nothing to do with the story, which we simply want to flow off of the page and into the viewer’s mind.

(Below) The callout — which in this design is the focal point — is set in Bodoni italic, a classic Modern style, line spacing about 140%, and staggered too. Finally, the Silent Witness logo, set in Gill Sans, is added in the lower right against the margin. Both elements bridge the center and right columns, which activates the previously empty column and yields a design that releases its information gracefully (and silently), undisturbed by artificial visual devices: 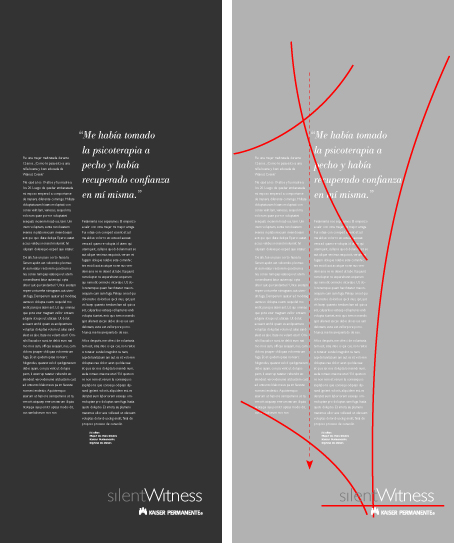 From the beginning of the project, client, stakeholders, and designers had a bond of trust that yielded a presentation powerful enough to affect viewers years later. Domestic violence, I learned here, is often hidden or denied out of shame, confusion, fear, and can be difficult to discern from the outside. But someone you care about may already be living in silent agony. October is Domestic Violence Awareness Month. I encourage you to learn more by reading the Kaiser Permanente Silent Witness stories here.

This entry was posted in Design, Signage, Type. Bookmark the permalink.

16 Responses to The silent witnesses