A car dealer approached us recently asking for help designing an image to commemorate its 100th anniversary next year. This dealer had started selling cars out of the local general store in 1911 and has been at it ever since. That’s a long time!

But they were stuck.

What they’d hoped for was an image that would convey three character attributes of their company — integrity, resilience and commitment. These are wonderful qualities. Problem is, any one of them is almost impossible to convey in a graphic (quick! what does resilience look like?), not to mention all three.

Not only that, but they’re inward-facing; that is, they have meaning not to the customer but only to the company.

My recommendation: Turn and face the customer. One hundred years in business, all by itself, speaks plenty about values and vision. The company has stood the test of time and all that that implies — and the customer will get it.

I cobbled together a rough and said how about if we picture it this way: 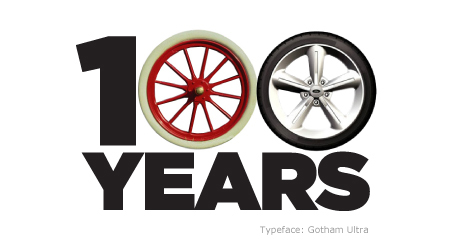 It’s a Model T wheel and a modern car wheel, a compact image that spans a century of automobiles. Use it as a badge and stick it on everything all year — Web site, stationery, print advertising, signs, posters, invoices, all of it, wherever the company name or logo also appears. 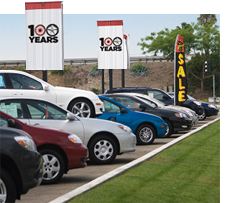 It of course needs refinement, and whether they use the image or not remains to be seen, but I pass along the idea because I’m sure there are many old-new topics that can be depicted in a similar way.

78 Responses to Too many messages