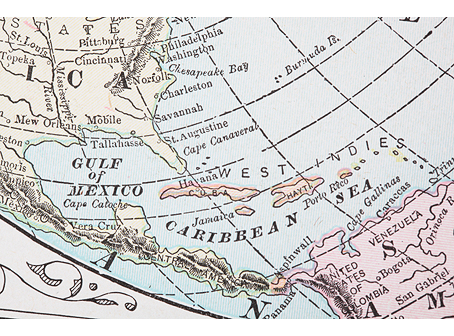 Dear readers: I recently pulled from my files a newsletter sent by a subscriber years ago. It inspired me at the time to write a publisher’s letter whose message has not changed today. I reprint it for you here.

Before & After has a pretty far-flung audience. We have readers in 50 states, but we’re also in 65 [now 131] different countries, and it’s always fun to receive mail from an exotic new place—Paris, Nairobi, Rio de Janiero, Mumbai. We sit at our desks while our words travel the world. Last week a letter arrived from a subscriber in Haiti — Haiti — along with a desktop published report.

John Currelly works for the U.S. Agency for International Development [today he works here] as officer of a monitoring unit that keeps the agency, local government and others up to date on the economic and health status of Haiti’s rural populations. Its work is published quarterly in the USAID Monitoring Report and sent free to interested parties.

His Report is like many other desktop-published reports — it’s plain, with pages of text, tables, charts and maps set mainly in Times, in black & white. But it is different in one way. The difference between Mr. Currelly’s report and yours is its content.

Page 4: “Total preschool-child malnutrition rates showed little average difference between January–August last year and the same period this year. In both periods, about 54 percent of children attending the monitored facilities were found to be underweight for their age, and close to 20 percent were moderately or severely affected.”

Page 17 is the price of food, and it isn’t Taco Bell kind of food; it’s plantain-and-millet kind of food.

Mr. Currelly writes, “I have to say that your publication gives me inspiration to continue on the path of discovery that is desktop publishing. Oddly enough, having been raised as a practical farmer, one of my biggest problems has been getting to believe that making something merely look better was worthy toil. I often justified hours spent on design (expensive hours, paid for by the U.S. taxpayer) by emphasizing the benefits of ‘clarity’ or ‘ease of understanding for busy folks’ that it gave to the production.

“I am coming to believe that pleasing design needs no apology, even, if not especially, in scientific publications. Our societies are now at the stage that a great number of us can not only appreciate the pleasures offered by good design, but almost demand that artistic expression be placed on the same level as informational expression. I’m not sure why, but it has much to do with why we are human.”

Such contrasts these are! Here is a reader, a farmer, who has worked 15 years in a nation where half the children are undernourished and 1 in 10 will die, 7 of 10 adults are illiterate, half the urban population has no access to safe water . . .

What accounts for this? How does design even exist in such an environment, much less inspire?

You might look again at what you do. You sit with a full tummy in your warm office at a blank screen with an ad to make, and you’re thinking, “Jeez, I have to come up with something original and clever and it better be soon.” That’s not how to think. As a designer you have a privilege, one that others do not. It is the privilege of making visible that which others can only imagine, feel or think. When you do this, you open a window through which your audience can see, know and understand.

Design is about communication.

To take a word or a thought and design it is to give it form and body, so others can see, too, and respond.

The more compelling the design, the deeper the response.

By more compelling, I don’t mean prettier, necessarily, or artsier. I mean richer, more complete, more efficient. The design I’m talking about isn’t about making something only look better, but actually function better. Design has to do with how a thing works.

So who will give form and body to your company’s name? Who will open the world’s window to your product?

Who will speak for the poor Haitians?

You will. You’ll work at it until it shouts.

You will because you can.

The print version of this article is in Before & After issue 26.

24 Responses to Why we design